Chelsey In The Stacks

When I started my new job, I knew that I wanted to continue running a Tween Book Club like I had in my old position. It took me almost a year and a half, but this fall I finally got it up and running! Our first book: Aru Shah and the End of Time, by Roshani Chokshi.

Here’s the short description of the book I used on our promotional material:

“Aru knows she shouldn’t light the cursed lamp in the museum she lives in with her mom, but when she can’t escape her bullying classmates she takes a chance – and unleashes a demon out to destroy the world! “

Why this book? Firstly, I had read it back when it came out in 2018 and found it to be a fun, funny adventure. Secondly, I knew I wanted to focus on books that represented my diverse community. 70% of the kids under twelve in my area are non-white, and our Indian American population is one of our fastest growing communities. Main character Aru is Indian American main character, in addition to being a whip-smart heroine, and as one of the first series to debut under the Rick Riordan Presents label The End of Time brings Hindu mythology to the modern-day adventure storytelling tweens love.

Number of kids: 15 registered, 9 on the waitlist, and in the end 10 who actually attended.

Format: We spent the first 10 minutes making name tags and saying hi. Then we spent about 30 minutes discussing the book, and spent our last 20 minutes doing a themed activity.

Cost: about $100. The paperbacks were on sale for less than $4/copy, which helped keep costs down a lot (I give every kid who registers a free copy to keep, because I don’t want long hold wait times to prevent any kid from attending). The rest I spend on supplies for our activity.

Snacks: No snacks this time. Big mistake! We met at 4:00 pm after school and the kids were bouncing off the walls.

Overall, the book was a hit! The kids loved the big bad, the Sleeper, who freezes people in time as he chases Aru and her new sister Mini, and generally hulks around menacingly and has a BIG SECRET, which of course I won’t spoil for you. They also loved that Aru spends her entire adventure stuck in her Spider-Man pajamas. Here are some of the discussion questions I used to help the kids think more deeply about the book:

The activity: light the lamp with squishy circuits!

The main plot of the book is kicked off when Aru lights an ancient lamp in the museum she and her mother live in. Even though Aru has been warned many a time not to light the lamp, she does so anyway to impress her classmates. My planned activity was to use squishy circuits to make our own light-up lamps.

I say “planned activity” for a reason. If you’re not familiar with squishy circuits, the idea is to sculpt a simple circuit out of a dough that conducts electricity (like Play-Doh), a dough that does not (like modeling clay), a battery pack, and an LED. I was excited to combine some STEM learning with our book club discussion, but I made one key mistake:

I underestimated how much kids this age still need to just play with Play-Doh.

In an era where kids are constantly scheduled in after-school and weekend activities, they’re often pushed to stop playing with toys far before they’re ready. As soon as I brought out the Play-Doh, I saw their faces light up and I realized that for many of my book clubbers, it had probably been awhile – maybe even years – since they had last just played with Play-Doh.

Before I brought out the Play-Doh, I had quizzed them on circuits. What is a circuit? How does it work? What conducts electricity, and what doesn’t? My kids answered every question right, so quickly that they almost seemed bored, and I assumed they had studied circuits in school already. And perhaps they had, but as it turned out, being able to answer every question correctly was not the same as being able to build a circuit with my guidance.

They were much more interested in sculpting – flowers, rivers, ice cream cones – and then were completely baffled by why their circuits weren’t working. While they understood the concept of the loop the electricity needed to travel in order to light the LED, they couldn’t put it into practice – and many of them didn’t want to. Building the circuit was frustrating. Sculpting freely was liberating.

If I were to do this again, I would ditch the circuits completely and let the kids sculpt their own magic objects from the Play-Doh, no constraints, no sneaky science. Lesson learned! (Or was it? Stay tuned for next book club!)

Speaking of next book club, what are we reading next? The deliciously creepy Small Spaces, by Katherine Arden! 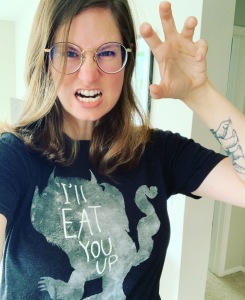 Chelsey is a children’s librarian for Alameda County Library, where she puts on storytimes for 200+ patrons and is the local baby whisperer. She is passionate about hands-on, process-based programming that lets kids take the lead in their own creative journeys.

When she isn’t librarianing, she’s writing, making art, making music, and generally being introspective with a cat on her lap.